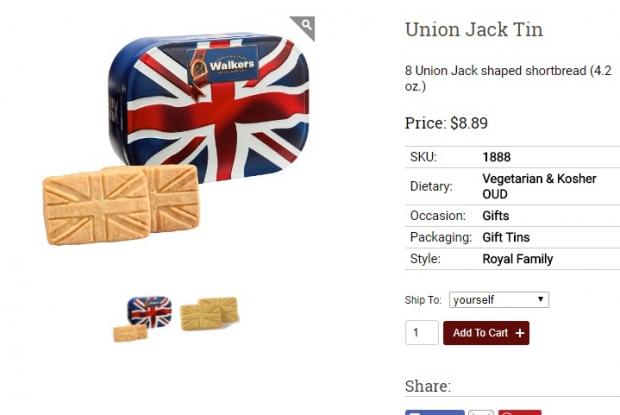 Walkers, the famous Scottish biscuit brand, has come under fire from some Scots for using the Union Flag on the packaging of a few of their many products aimed at overseas markets and for sale as British souvenirs.

Objectors claim that it will devalue the efforts made at marketing Scotland to the World and some have vowed to boycott the company’s products for the rest of their sojourn on this earth.

Whether they ever bought Walkers’ products in the first place, we shall never know, but I have found that very few people are competent boycotters.

I boycott many companies, usually over more weighty issues, for example, I have avoided buying anything made by Nestlé for many years due to their infamous campaign to convince African mothers to use their milk formula rather than to breast feed their children. The deaths of many children have been attributed to the company.

In addition, Nestlé cocoa is produced in the Ivory Coast using child and slave labour. They even admit that the supply chain has issues with child labour, but claim that it is a problem which is difficult to monitor.

Really? “The world’s leading Nutrition, Health and Wellness company” cannot properly monitor its supply chain? Clearly not. Even if one percent boycotted the manufacturing giant, would they care?

This post is getting political, but I will return to flags in a moment. I have also been boycotting Tesco’s for about twelve years over several issues, including the horrible way they have acquired many of their town centre supermarkets, ousting local traders using subterfuge.

The story of Linwood, once the home of Scotland’s only major car plant, is one example of the lengths they have gone to in order to destroy their opposition.

Talking of Tesco’s, they have also been involved in a flag war of their own. Supposedly, customers in England objected to the Scottish saltire on punnets of strawberries (if a ghastly plastic container can rightly be termed ‘punnet’).

It is true that Scottish produce is usually marketed as such, while English products are ‘from the UK’ and they don’t get to see the St George flag on their food. I think I saw it on the wrapper of cheddar once, but it is not a common sight.

Since nationalism increased north of the border, there seems to have been a corresponding increase in bitterness on both sides of Hadrian’s Wall.

It is ironic that the Scottish National Party is in love with the European Union to the extent that their fanaticism over what they call “independence” could be more reasonably described as the desire for dependency on Brussels.

If they do achieve their aim – and the pursuit of real independence would not be an ignoble endeavour – it probably won’t be too long before the EU flag is emblazoned all over shortbread packets along with “Made in the EU” on the back.

Would they accept this particular Union flag in place of the Union Flag or, for the matter, the St Andrew’s Cross?

I wonder how many nationalists have an EU flag on the licence plates on their car.

What do you think? Should shortbread be Scottish or British? Does it matter? I love shortbread, so it won’t taste any different, but could the loss of Scottish identity harm our industry more than successive governments have?

Blogger and owner of Flags of the World. View all posts by Stewart Cowan